The characteristics of aging in Asian skin are closely tied to the ancestry of the individual. There are several scientific studies from Asia that discuss the most prominent features of aging in various Asian populations. Several of these studies demonstrate discolorations as a major component of photoaging (aging due to the sun). These pigmentation problems include dark discolorations on the face, sun spots or liver spots (solar lentigines), and brown warty-growths (seborrheic keratoses). There are other studies that demonstrate wrinkling as a prominent feature of aging in the Asian population.

Dr. Goh studied a population of 1500 Chinese, Indonesians, and Malaysians with brown skin who lived in Singapore. A prominent feature of aging in this population was increased pigmentation. However, unlike caucasian skin, coarse and fine wrinkles were not a prominent feature, and when they occurred the individuals were well advanced in age.

The characteristics of aging in a population of 407 Korean men and women, who were ages 30-92 years old, were studied by Dr. Chung. He identified wrinkling and discolorations as the primary characteristics of aging in this population. The number of wrinkles increased as the age of the individual increased and as the individual spent more time in the sun. Wrinkles occurred in 19.2% of Koreans who spent 1-2 hours per day in the sun as compared to 64.6% of Koreans who spent more than 5 hours per day in the sun. There was a greater risk for the development of wrinkles in women than in men. Dr. Chung also reported that discolorations were another prominent feature of aging in the Korean population. The discolorations appeared as two distinct types: either dark spots on skin exposed to the sun and/or warty growths called seborrheic keratoses. In Koreans greater than 60 years of age, seborrheic keratoses were more common in men than in women. In those 50 years and older, dark spots were found more frequently in women than in men. Women in their 30s began with an average of 4.3 dark spots on their skin, which increased to 23.5 by 70 years of age and 25.1 by 90 years old. With regard to both wrinkles and dyspigmentation, increased severity became apparent at 50 years of age. The effect of excessive sun exposure in those individuals that smoked cigarettes were dramatically multiplied.

A study by Dr. Kotrajaras from Thailand demonstrated very dramatic aging of the skin of individuals who had spent many hours in the sun. The onset of the aging changes occurred at age 40. The skin was deeply discolored and had both fine and deep wrinkles. 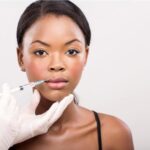 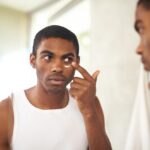