This is a type of skin disease in which the skin cells build up and becomes itchy, scaly and forms dry patches. It can grow on anywhere in the body but it is common on the knees, elbow, trunk and scalp. It is a common long term chronic disease that has no permanent cure. It is a noncontagious (it cannot be passed from one individual to another), auto immune disease that produces a thickened, red or dark purplish scaly skin. It is a genetic disease that forms as a result of the skin cells being multiplied for up to 10 times faster than normal. It can be a complex, chronic, multifactorial inflammatory disease. Plaque psoriasis is the most common form of psoriasis.

Obesity, diabetes, and heart disease are more common in people with psoriasis. It is caused by Inherited genetic defects that adversely affect the immune system. Psoriasis is basically a defective inflammatory response in which the increase in skin cells is triggered by inflammatory chemicals produced by specialized white blood cells called T-cells. It affects all races and both sexes although it can be seen in people of any age, from babies to seniors, patients

Those first diagnosed are usually in their early adult years. The self-esteem and quality of life of patients with psoriasis often get affected because of the appearance of their skin. Rachakonda et al. (2014) states that Psoriasis affects more than 8 million people in the U.S.

The most common symptom is rashes which on the skin which may also exist on the joint or nails. It is accompanied by pains in the joint, while rashes, flakiness, dryness, fissures, peeling, small bump, thickness and redness are common to the skin as well as the individual exhibiting. depression, enthesitis, itching, joint stiffness, nail pitting, or plaqueness.

Psoriasis is considered an incurable, long-term (chronic) inflammatory skin condition that varies periodically by improving and worsening. It is normal for psoriasis to spontaneously clear for years and stay in remission though many people notice a worsening of their symptoms in the colder months. It ranges from mild with small areas of skin to severe with large, thick plaques to red inflamed skin affecting the entire body surface

The exact cause of psoriasis is unknown although genetic predisposition and environmental factors, are involved. It is common for psoriasis to be found in members of the same family as defects in the immune system and the control of inflammation are assumed to play significant roles. But medications like beta-blockers have been linked to psoriasis too.

To stop the skin cells from growing quickly and to remove the scales is the basic reason for treatment as it has no permanent cure. Topical ointments, light therapy and medications can assist in the treatment. Photodynamic treatment such as phototherapy which is also known as light therapy is a type of treatment that might reduce the pain and itchiness that is being felt. Ultraviolet (UV) light, which reduces inflammation and slows down the creation of skin cells is often used. Phototherapy is safe for both pregnant woman and children.

Vitamin D (Sunlight) can help reduce inflammation throughout your body, the nutrient can help clear or prevent psoriasis plaques. Sunlight triggers the body to make the nutrient, which is beneficial to strong bones and immune function. Vitamin D nutrient can be found in few foods naturally.

Narrowband ultraviolet B (NB-UVB) is the most common form of phototherapy. plaque or guttate psoriasis are treated using it. The light bulbs emit a wavelength of between 311 -313 nanometers(nm) of light. Your starting dose will be dependent on your skin type i.e., white, brown or black skin and how easily you tan or burn. It is most effective when it is performed 2-3 times weekly. An emollient such as petroleum jelly can be applied before each session of the therapy.

Broadband ultraviolet B (BB-UVB) light therapy is an older form of phototherapy than NB-UVB. Although treatments are similar. It emits a wavelength of light between 270-390nm and the starting dose is solely dependent on skin type. According to a study done in 1981 as reviewed by Healthline Media, 90 percent of people had clear skin after having 3 sessions per week while 100 percent of people had clear skin after having 5 sessions weekly with an average of 27 treatments. It is considered to be less effective than NB-UBV with a higher chance of causing side effects but should be considered when NB-UBV isn’t an option. It is most effective for plaque psoriasis but can also be used for glutate psoriasis.

BB-UVB is considered less effective than NB-UVB and is more likely to cause side effects. It should be reserved for instances where NB-UVB isn’t a treatment option. It can be considered as a monotherapy or with retinoid acitretin(soriatane).

Targeted ultraviolet B (UVB) light therapy is applied to small areas of the body which involves the use of an excimer laser, excimer light, or NB-UVB light. If the psoriasis occupied less than 10 percent of your body which is known as ‘localized psoriasis’. This method exposes you to few UV rays which reduces side effects and health risk and results to the skin being cleared faster. It should be performed 2-3 times weekly. It can be used to treat plaque psoriasis, scalp psoriasis, palmoplantar (soles or palm) psoriasis. Excimer lasers are more effective than excimer lights for targeted NB-UVB lights. Adults with plaque psoriasis can use both excimer laser therapy with topical corticosteroids.

Psoralen plus ultraviolet A (PUVA) therapy use ultraviolet A (UVA) lights with psoralen which is a medication that increases sensitivity to light. It can be taken orally, applied topically or mixed in bathwater. It is very effective but it’s not used widely nor available. While oral PUVA may come with the highest risk of drug interaction and side effect, it is good when combined with oral retinoid. Bath PUVA is good for adults with moderate to severe plaque psoriasis.

Risks and Side Effects

Not every person can use light therapy which includes people with lupus, skin cancer history, or skin condition called xeroderma pigmentosum, which makes people very sensitive to sunlight. Medications which include some antibiotics can also make you sensitive to light.

Phototherapy can make your skin sore, red, leave blisters and change the pigments of your skin. It also increases risk for certain types of skin cancer, but your health care provider should watch for warning signs during and after treatment. The different forms of phototherapy, also come with their own unique risks for example;

BB-UVB increases the risk of genital skin cancer therefore, genital shielding and eye protection are recommended. If you had history of skin cancer, arsenic intake, or exposure to ionizing radiation (such as X-rays) while NB-UVB therapy can cause the same side effects as BB-UVB, but they’re less likely to occur with NB-UVB. For targeted UVB therapy, side effects include redness, blistering, burning, itching, hyperpigmentation, and swelling while risks of oral PUVA includes phototoxicity, nausea, and itching but it is not recommended for children under 10 years old and women who are pregnant or nursing mothers, or people with certain skin conditions. For children above the age of 10, caution should be taken when they take immunosuppressive medications or have had certain skin conditions or been exposed to carcinogens.

Both PUVA and topical PUVA may cause phototoxicity.

While sunshine therapy may increase the risk of skin cancer, the use of tanning beds has a much higher risk of skin cancer than the medically supervised treatments. For Goeckerman’s therapy, the coal tar used in this form of phototherapy may cause the skin to burn. PDL side effects include hyperpigmentation of the cuticles, minor pain, or small spots known as ‘petechiae’. Grenz ray therapy can cause painful marks if it is not administered correctly. This side effect is known as radiation dermatitis or radiation burns. Visible light therapy basic effect is hyperpigmentation. For PDT, the side effects include burning sensations and severe pain. 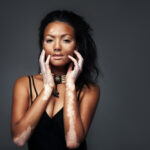