Drugs work by modifying body processes, and it can affect the skin too.

While treating and maintaining other conditions, the skin might be affected. These adverse reactions could lead to the presence of darker skin patches- hyperpigmentation.

As the name implies, fixed drug eruptions are affixed to one spot and they occur hours after using a prescription drug. It appears as a round dark or grey patch on the skin and occurs within a day of using the drug.

Photosensitivity reactions occur when the sun interacts with the medication you are taking.

In such situations, black or blue spots, redness or inflammation occurs in the areas of your body exposed to the sun; while parts covered normally covered by clothing remain normal. Drugs that can cause photosensitivity reactions are Non-steroidal anti-inflammatory drugs (NSAID), antibiotics, heart medications, and hypoglycemic drugs used to treat diabetes.

This occurs when a component of the drug interferes with your skin. It is often facial, appearing around the mouth. The reaction clears off about a week after the use of the drug has stopped.

Secondary post-inflammatory hyperpigmentation occurs after the causative condition, such as a fixed drug eruption or a photosensitivity reaction has cleared. When the scars occur at the lower layers of the skin, it might become more difficult to resolve, therefore requiring treatments discussed in the medication section to address.

Pay attention to your skin, especially when you are using a new medication. This will help you to detect any changes in your skin and to act promptly to discontinue it or to seek alternatives.

The following drugs are known to induce pigmentation.

Non-steroidal anti-inflammatory drugs (NSAID): these drugs cause fixed drug eruptions that might occur on the face, in the genitals and other extreme parts of the body.

Heavy metals; Damage from heavy metals might scar permanently. They can cause gray or brown pigments in parts of the body.

Antipsychotics (chlorpromazine and related phenothiazines: React with the sun. Can cause cumulative pigmentation.

Tetracyclines: Affects older patients and people who use the drug for a long time. Can spread to wide areas.

Antimalarials; Can react to the sun. Chloroquine is known to cause sun patches and to cause tints in the nail.

Using sunscreen might mitigate the effects of some of these drugs, especially those that result from exposure to the sun. It is advisable, however, to discuss with your doctor if you notice any adverse reactions. 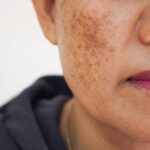 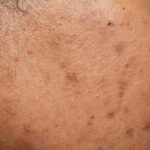 How To Get Rid Of Back Acne