Darker skin types (from Fitzpatrick skin type IV to VI) are prone to tanning and pigmentation. We know that they don’t burn as easily.

This tanning is a protective mechanism. It is the pigment cells producing more melanin in order to protect the DNA of the cells from mutations. This is exactly the reason why skin cancers such as melanoma are less common in darker skin types. However, this predisposes people of rich complexion towards even more pigment-related skin concerns.

UVA rays penetrate deeper into the skin and cause the degradation of collagen while UVB rays act more superficially on the epidermis, causing changes in skin texture as well as color.

Prevention of sun-induced damage is important in darker skin tones because even though melanoma and other cancers like squamous cell carcinoma and basal cell carcinoma are relatively rare, they still remain a grave concern after long-term continued exposure.

Once pigmentation develops, it tends to be more stubborn in dark-skinned individuals. Moreover, treatments such as lasers and chemical peels are associated with a higher risk of post-inflammatory pigmentation in such cases.

Hence, strategies needed to prevent photodamage at an early stage need to be adopted.

For example, incorporating strict use of sunscreen into the daily routine will prevent years of cumulative sun-induced damage.

Traditional anti-aging options such as retinoids work well for treating photodamaged skin since they act at the cellular level. They will even out the skin tone as well as make lentigines and freckles look less pronounced.

Many treatments like lasers, light therapy, dermabrasion, and chemical peeling can be used for treating photodamage. However, there is a higher risk of post-inflammatory hyperpigmentation. Immediate post-procedure care in the form of sun avoidance and sun protection is vital in order to prevent any untoward side effects. 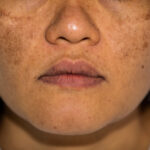 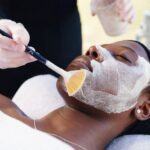